Dr. S.B. Mujumdar is the Founder and President of Symbiosis – a multi-national, multi-lingual and multidisciplinary educational complex of global repute. A distinguished academician and educationist, he is also the Chancellor of Symbiosis International (Deemed University).

He joined Fergusson College, Pune as Professor and Head of Department in Botany which position he held for 20 years. He was a recognized postgraduate teacher and a guide for Ph.D. students. He was a member of Pune University’s Executive Council, the Senate, Academic Council (for 14 years) and Chairman of the Board of Studies in Botany (for 9 years). He was also I.C.C.R’s Foreign Academic Advisor at Pune University (for 7 years).

He has published over 50 original research articles in several national and international scientific journals. He has authored several books on Life Sciences and has contributed to over 200 articles on Science, Education and Youth Development. He has also been the Chairman of the Educational Wing of FICCI in 2005-2006.

Deeply touched by the hardships suffered by the Foreign students - especially Afro Asian students studying in Pune, he established ‘SYMBIOSIS’ in 1971 with a view to help them and provide them with a ‘Home away from Home’. He soon realized that education is the best medium for promoting international understanding. He, therefore, started establishing educational institutions imparting quality instruction in diverse disciplines e.g. Management, Law, IT, Computers, Biomedical Science, Engineering, International Business, Geo-Informatics, Media & Communication, Photography etc. Presently, Symbiosis has 46 institutions and about 32000 students from all states of India and 85 foreign countries. The Ministry of HRD, Government of India, conferred upon Symbiosis in 2002 the status of ‘Deemed to be University’. Many of Symbiosis institutions are ranked amongst the top 10 institutions in India and they have a placement record of almost 100%. Realizing the importance of distance education, Symbiosis has established SCDL - Symbiosis Centre for Distance Learning - which conducts many on-line courses and has over 2 lakhs of students from India as well as many foreign countries.

All Symbiosis institutions are generally need-based. These are run on and adhere to the best ethical practices. The Faculty is selected purely on merits and without considerations of caste, creed, religion or region. One of the unique institutions established by Symbiosis is SIMS – Symbiosis Institute of Management Studies (for Defence Personnel and their dependents) - which provides management education exclusively for children of Defence Personnel. Another innovative institution is the ‘Pune Police Public School’ managed by Symbiosis and which provides education to the children of Police Personnel. Apart from these academic activities, Symbiosis has also established a magnificent Dr. Ambedkar Museum and Memorial which houses the personal belongings and memorabilia of Dr.Ambedkar. It has also established an Afro-Asian Cultural Museum.

Dr. Mujumdar is the recipient of many awards and honours. The Government of India has conferred on him ‘Padma Shri’ in 2005 and ‘Padma Bhushan’ in 2012. Tilak Maharashtra Vidhyapeeth has conferred on him ‘D. Litt.’ in 2016. He became the first recipient of the ‘Dr. APJ Abdul Kalam Memorial Award’ in 2016. He has received Punyabhushan Award (2009), FIE Foundation Puraskar (2006), ‘Maharashtra Gaurav Puraskar’ (2003), Top Management Club Pune’s “Excellence in Education” Award, the Rotary Club of Pune’s ‘Service Excellence Recognition Award (SERA)’, The Rotary Foundation of Rotary International Paul Harris Fellow, Giant International Lifetime Achievement Award, Lion Gaurav Puraskar, Pune Municipal Corporation’s ‘Roll of Honour for Life-Time Achievement’ (2006), Pune Festival Award and many others. 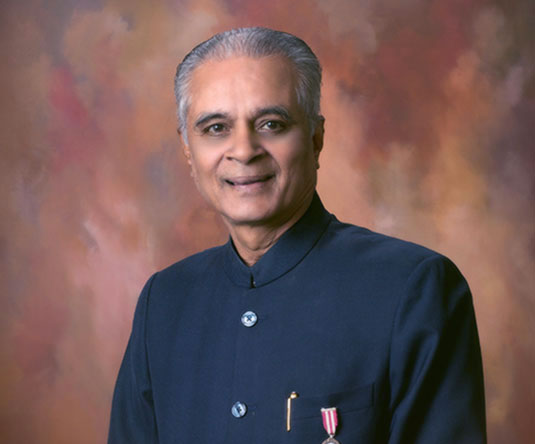